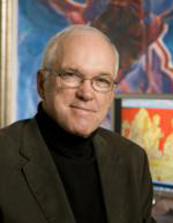 Bruce Lawrence is a Professor Emeritus of Duke University where he taught for four decades and the inaugural director of the Duke University Islamic Studies Center. Lawrence holds a PhD in History of Religions from Yale University and has been awarded honorary ThDs from both Virginia Theological Seminary and Episcopal Divinity School. He is the author of numerous publications on religion and Islam, including Who Is Allah? (2015), The Qur’an: A Biography (2006), New Faiths, Old Fears (2002), and Sufi Martyrs of Love (2002).