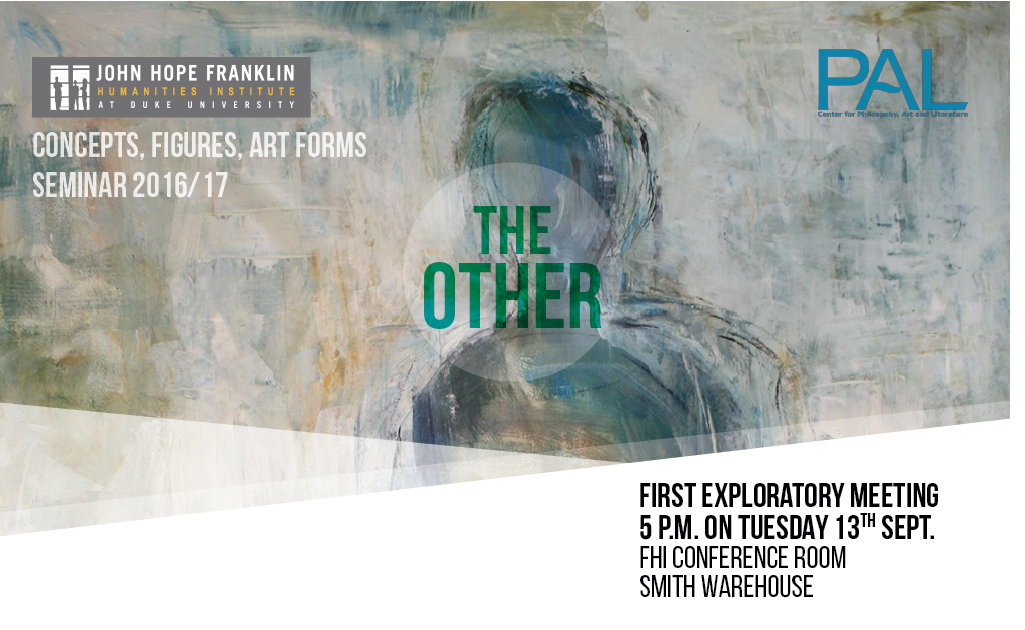 If you are interested in exploring the concept of the Other this academic year, please come to the first, exploratory meeting of this new FHI/PAL seminar at 5 p.m. on Tuesday 13th September, FHI Conference Room, Smith Warehouse (enter in Bay 4, the room will be the first on your left). The seminar is co-convened by Toril Moi (Literature and Romance Studies, English, Philosophy, Theater Studies) and Corina Stan (English).

In the first meeting, we will constitute a rough plan for the group’s work over the year, based on the interests of the participants. We hope to make the seminar truly useful for anyone working on a topic involving ideas of otherness, including the question of how to live with others. Faculty and graduate students in the humanities and relevant social sciences are warmly welcome.

The seminar will meet monthly to discuss readings, and (if seminar members wish) to share and discuss our own work. We will also organize some public events. We hope to pay basic research expenses (books, etc.) for graduate student participants.

Over the past decades, the concept of the Other has been absolutely central to work in the humanities and the interpretive social sciences. But by now its popularity has made it overly capacious, even vague. Competing theories of "otherness" and "alterity" abound. There are myriad studies of "others" in history, society, film, literature, and art, focusing on the racial other or the gendered other, on figures such as the madwoman and madman, the reject, the subaltern, the migrant, or the animal.

The concept of the "other" is fundamental to the increasingly urgent question of how to live with others. How far does it help us to imagine a non-exclusionary community?

Current debates about "the other" are fraught with tension, not least between those who consider the concept fundamental to an ethics seeking to preserve, contemplate, and respect difference in all its forms, and those who consider that the concept sets up a dangerous fiction of unbridgeable difference, and thus turns into a refusal to acknowledge our shared humanity.

The seminar will seek both to historicize and to clarify the concept of the Other. While we are interested in the historical origins of the concept, the convenors are particularly interested in examining the concept’s twentieth- and twenty-first-century elaborations, beginning with the work of two French philosophers, Simone de Beauvoir and Emmanuel Lévinas, and continuing with some of the myriad incarnations of the concept that have followed since then. We hope to work together to investigate this protean concept in all its variety, tracing it not just in philosophy and theory but also in literature and other art forms. (Specific works to be discussed in the seminar will depend on the interests of the participants.)