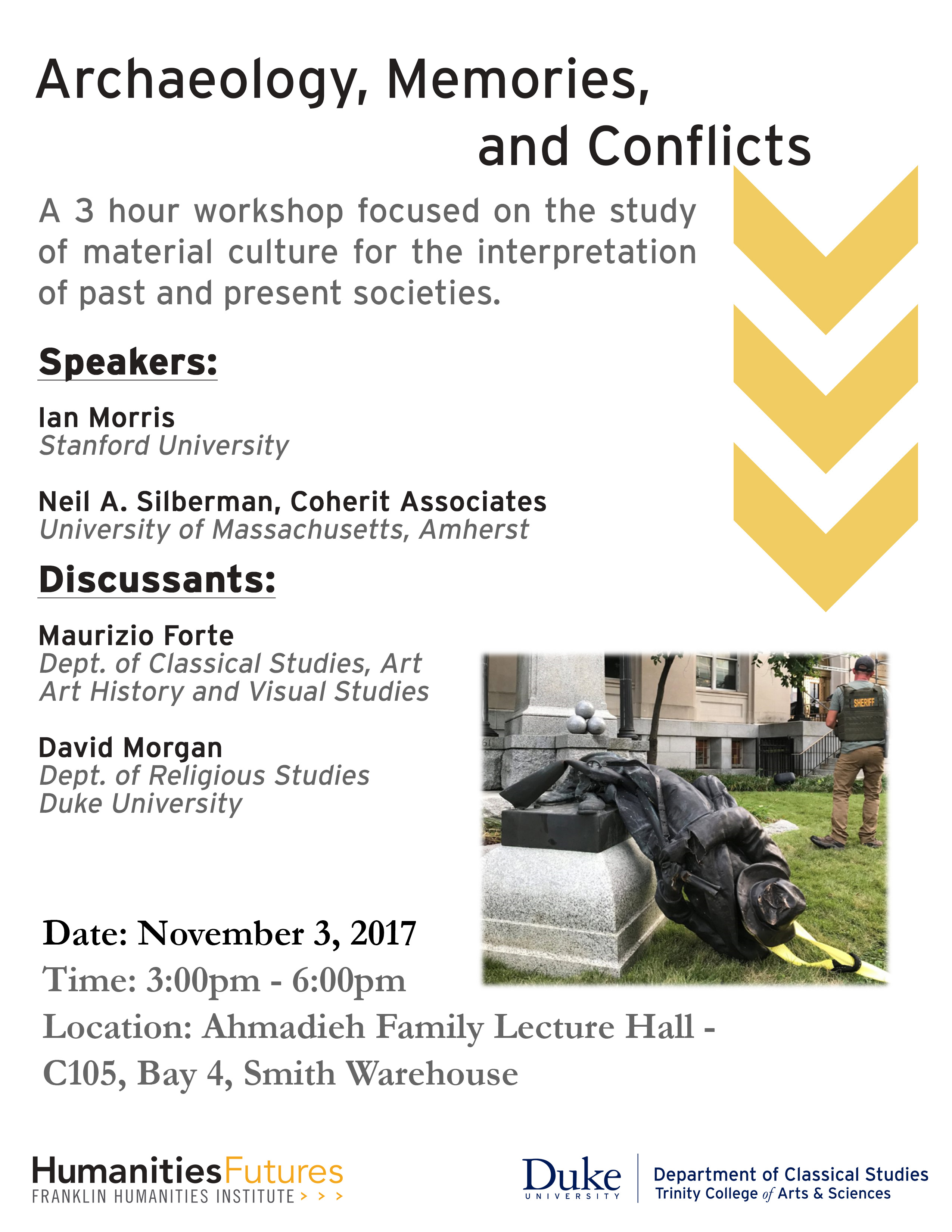 A 3 hour workshop focused on the study of material culture for the interpretation of the past and present societies.

As far back as records go, we see the winners in wars destroying, desecrating, or carrying off as trophies monuments that the losers had set up in honor of their gods and heroes. This can be documented everywhere from Mesoamerica and the Middle East to China. However, in the later eighteenth century AD, western Europeans came up with a new way of treating defeated enemies’ monuments: they began studying them scientifically or carrying them off to set up in public-access museums, where scholars from all over the world could investigate them. Napoleon’s expedition to Egypt in 1798 is often seen as a decisive moment.

Both the ancient and the modern treatments created soft power for the victors, but while the older methods celebrated the victor’s power to destroy the enemy’s heritage, the newer presented victors as enlightened, legitimate because they were able to classify and explain the enemy’s culture within a universal scientific framework rather than just annihilate it. In the nineteenth century, imperialists competed to amass knowledge and fill world-class museums, and in the twentieth century, states that failed to conform to increasingly liberal approaches to other cultures’ pasts undermined their own legitimacy.

The US federal government’s tolerance since the early twentieth century of statues US to leading figures in the armed uprising against the Union was an unusual offshoot of the liberal tradition, and so too is the largely liberal twenty-first-century intolerance of them. I will compare both with developments in other countries, closing by asking whether the 250-year-old liberal technique of creating soft power by appropriating and valuing former enemies’ pasts is now evolving into new forms.

Ian Morris is a historian and archaeologist. He has dug in Britain, Greece, and Italy, most recently as director of Stanford’s excavation at Monte Polizzo, a native Sicilian site from the age of Greek colonization. He began his career studying the rise of the Greek city-state, then moved on to ancient economics, and now works on global history since the Ice Age. He has published fourteen books. One of them, Why the West Rules–For Now (2010), has been translated into thirteen languages, and the most recent, Foragers, Farmers, and Fossil Fuels: How Human Values Evolve (2015), into six. In addition to digging and writing, he regularly speaks to academic, business, government, and strategy groups, and has been a visiting professor in the University of Zurich’s executive MBA program. At Stanford he has served as chair of the Classics department, director of the Archaeology Center, and Senior Associate Dean of Humanities and Sciences. He has held several research awards, including Guggenheim and Andrew Carnegie fellowships, and has won a Dean’s Award for excellence in teaching and several literary prizes. He is also a fellow of the British Academy, the Society of Antiquaries, and the Secular Policy Institute, and is a contributing editor at Stratfor, a stratgic forecasting company.

Neil A. Silberman: The Post-Postmodern Cult of Monuments: From Managing Heritage to Managing the Past

What makes us shudder when the Buddhas of Bamiyan or the Temple of Bel in Palmyra are dynamited? How do we feel when poorly maintained structures collapse at Pompeii? Why has the debate about the removal of Confederate monuments become so bitter? This paper will trace the evolution of the social role of historical and archaeological sites and monuments, with particular emphasis on the sanctification of their materiality. Beginning with Alois Riegl’s landmark monograph "The Modern Cult of Monuments" (1903), the paper will argue that the basic association of heritage authenticity with "original fabric"— "Time’s Visible Surface" as the art historian Michael Gubser has so aptly put it—increasingly makes the physical preservation—or, alternatively, destruction—of heritage resources conscious acts of collective identity. The concern with a monument’s "age value"—despite widely diverging or radically changing perceptions of meaning—has resulted in a dysfunctional heritage doctrine and a wide range of singularly ineffective "Save Heritage" campaigns. The worldwide diffusion of material-centered heritage practice, with its related emphasis on physical possession, has ironically transformed heritage into a potent weapon in the zero-sum game of contemporary identity politics. The paper will suggest that this "Postmodern Cult of Monuments" has been mobilized in an increasing number of ethnic, regional, national, and sub-national conflicts. The paper will conclude with the outlines of new conceptualization of heritage—a "Post-Postmodern Cult of Monuments"—as a process of identity articulation, rather than a collection of material places and things. Whether in Palmyra, Bamiyan, Pompeii, or Charlottesville, we must better understand how and why the preservation, repatriation, removal, or destruction of officially recognized cultural heritage have become powerful symbolic acts of ideological control.

Neil Asher Silberman is an historian and heritage scholar who has written widely on the contemporary political impact of archaeology and cultural heritage. He is the author of more than a dozen books on this subject, from Digging for God & Country (1982) to The Bible Unearthed (2001). He is an adjunct faculty member of the Department of Anthropology of the University of Massachusetts Amherst. From 2004-2007 he served as director of the Ename Center for Public Archaeology and Heritage Presentation in Belgium, and also served as president of the ICOMOS International Scientific Committee on Interpretation and Presentation and as a member of the ICOMOS International Advisory Committee from 2005-2015. He is a managing partner of Coherit Associates, an international heritage consultancy.