Conversation with the Authors: Claire Messud and James Wood 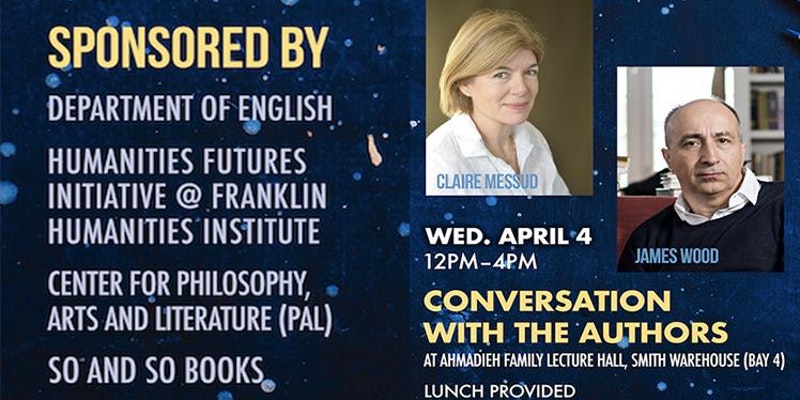 This event is FREE and open to the public, but registration is required.

Claire Messud is a recipient of Guggenheim and Radcliffe Fellowships and the Strauss Living Award from the American Academy of Arts and Letters. Author of five previous works of fiction including her most recent novel, The Woman Upstairs, she lives in Cambridge, Massachusetts, with her family. —http://clairemessud.com/

James Wood has been a staff writer and book critic at The New Yorker since 2007. In 2009, he won the National Magazine Award for reviews and criticism. He is also the author of a novel, “The Book Against God,” and a study of technique in the novel, “How Fiction Works.” He is Professor of the Practice of Literary Criticism at Harvard University. —https://www.newyorker.com/contributors/james-woodThis series is also sponsored by So & So Books.

This series is sponsored by the English Department, the Humanities Futures Initiative at the Franklin Humanities Institute, the Center for Philosophy, Arts, and Literature (PAL), and So & So Books.