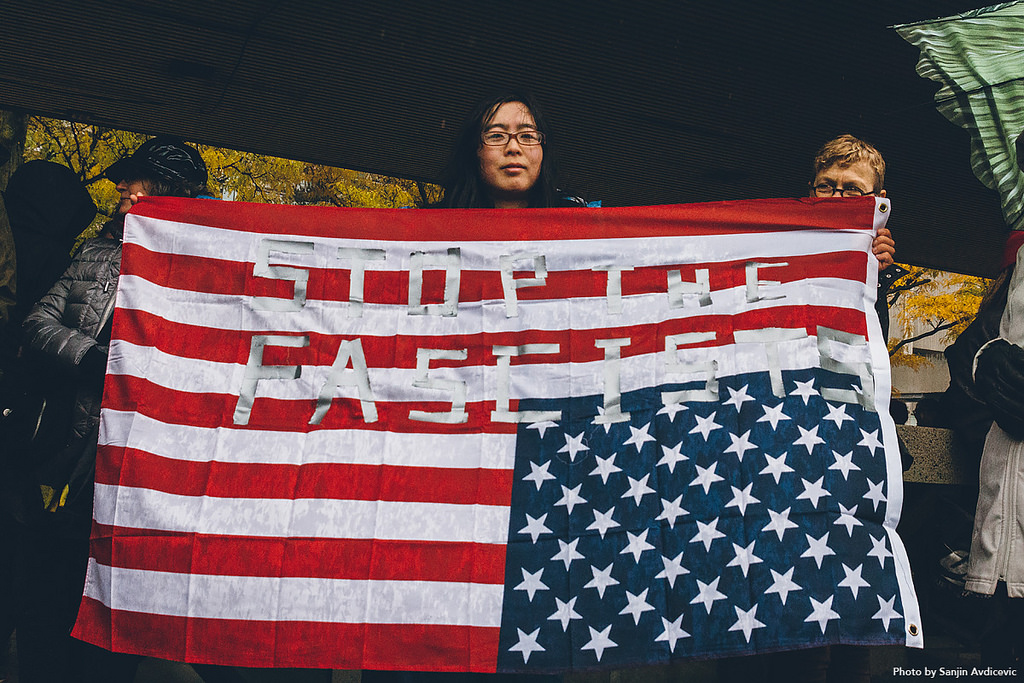 Anti-Trump protest, November 19, 2016. Photo by Sanjin Avdicevic. Available on Flickr under a CC BY-NC-SA 2.0 license.
Abstract: This essay discusses how the study of American political thought can help contemporary scholars grapple with the rise of authoritarian populism in the United States.

One of our primary tasks as political theorists is to analyze crises in public life. Consider Plato’s reflections on political turmoil in the Athenian polis, John Locke’s response to religious strife in Europe, and Hannah Arendt’s effort to come to terms with the horrors wrought by the Nazi regime. Those of us who are currently engaged in political theory must grapple with the rise of authoritarian-populism in the United States. This contribution discusses how the study of American political thought can offer insight into this crisis.

One of our primary tasks as political theorists is to analyze crises in public life.

By "American political thought" I simply mean the political theorizing of people—including academics, public officials, social reformers, agitators, literary figures, and legal professionals—who have made their homes in the United States. Scholars have long looked to historical American thinkers for alternatives to existing paradigms. In the 1980s and 1990s, scholars discovered that American thinkers pointed toward new perspectives on debates between liberalism and communitarianism. More recently, American political thought has been an important resource for scholars seeking to understand and address the endurance of racial and gender inequality in the United States and for those seeking an alternative to mainstream environmentalism, which has been criticized for favoring supposedly pristine wild spaces over places inhabited by humans.

Furthermore, recent political events demonstrate a need to pay more attention to authoritarian and fascist elements in American political culture. As an American political theorist, Trump’s rhetoric sounds strange to me because it does not appeal to any normative ideals. It’s not about protecting individual rights or achieving a Christian community; rather, it’s about the exercise of political and economic power. Is Trump really unique? Have I missed similar celebrations of unbridled power because I wasn’t looking for them? I was instead looking for Louis Hartz’s hegemonic liberal ideology, or James Marone’s hellfire tradition, or Wilson Carey McWilliams’s spirit of fraternity (Hartz 1955; Marone 2004; McWilliams 1974). Trump’s rhetoric lends support to Rogers Smith’s argument that ascriptive hierarchies have played an important role in American political culture (Smith 1999). But I’m not sure that Trump’s worship of strongmen and embrace of power that is not tethered to any kind of moral project other than promoting national self-interest is fully consistent with the ideological frameworks normally applied to American political development. If we go looking for fascist or authoritarian-nationalist elements in American political thought, we might be able to offer more perspective on the contemporary political moment.

If we go looking for fascist or authoritarian-nationalist elements in American political thought, we might be able to offer more perspective on the contemporary political moment.

Another benefit of studying American political thought is that it can alert us to ways in which seemingly innocuous or even benevolent ideas conspire with some of the uglier aspects of American culture. Take, for example, the idea—long espoused by American liberals—that each generation is getting closer to fulfilling the ideals laid out in the Declaration of Independence. Historians have taught us that the path toward creating a society that truly respects human rights is circuitous and reminded us that achievements like expanded voting rights are potentially fragile. Meanwhile, political theorists have highlighted how faith in progress has often blinded Americans to appalling realities. Martin Luther King Jr. famously observed that the misguided belief that we are steadily marching toward a future where all Americans are treated equally can make it easier to tolerate injustice in the present (King 1986, 292–96). More recently, Juliet Hooker has described how faith in progress justifies a politics of sacrifice in which oppressed groups are expected to avoid expressions of anger that might antagonize the wider society so as to not jeopardize the eventual creation of an egalitarian community (2016).

While criticizing faith in progress is hardly breaking new ground, further examination is needed in order to understand how faith in progress impacts contemporary politics. Even many of us who know intellectually that that path toward equal citizenship is by no means guaranteed, still on some unconscious level believe that progress is inevitable. This is, I think, why so many people—myself included—were shocked by Donald Trump’s electoral victory. It is worth inquiring why the faith in progress is so seductive, and what exactly letting go of this faith would entail. We might also inquire what, if any, work the idea of progress is doing in far-right ideologies. Is the desire to "make America great again" motivated by a fear of social decline? Or by a sense that the United States is somehow entitled to ever-increasing economic prosperity and global dominance?

If studying American political thought leads us to be suspicious of liberal narratives about inevitable progress, it may also teach us about remaining hopeful in dark times.

If studying American political thought leads us to be suspicious of liberal narratives about inevitable progress, it may also teach us about remaining hopeful in dark times. It is worth paying more attention to thinkers who recognized that American society was not steadily marching toward greater respect for human rights and yet continued to hope for a better world. King, for example, warned that the passage of time would not necessarily bring about human emancipation while also insisting that the emergence of "the beloved community" was possible. Given the increasing role of white identity politics in American society, it would be helpful to think more systematically about how hope might be possible in the face of seemingly intractable problems.

Finally, in an era where many scholars feel compelled to speak out against threats to democracy, the study of American political thought can also offer some insight into how to be a public intellectual. Many American political thinkers—including Jane Addams, W. E. B. Du Bois, James Baldwin, Ralph Emerson, and Gloria Anzuldúa—were public figures as well as intellectuals. I suspect that the reasons why particular people thrive as public intellectuals are largely idiosyncratic. It is, however, worth noting that many of these thinkers told stories to illustrate their arguments about American society. Additionally, most of these thinkers were not simply lecturing the American public, but were also listening to and observing people whose life experiences were different from their own. As a settlement worker in urban Chicago, Addams developed close relationships with working-class immigrants, and Du Bois’s writings were inspired in part by his travels to the "Black Belt." Those of us who are interested in reaching a broader audience would do well to emulate Addams and Du Bois in this. There is much that students of America political thought can teach democratic citizens, and also much that we can learn from others.

See also the brief essays on the future of political theory by Michael Gillespie, Chris Kennedy, Alexandra Oprea, and Sam Bagg, which come out of the same event and are intended to be in conversation with this paper.