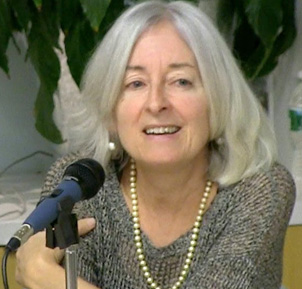 Jane Tylus has been a professor of Italian Studies and comparative literature at New York University since 2003. Her research interests center on the history of religion and women’s writing from the late medieval to early modern European period.  Her most recent books are Siena, City of Secrets and with Karen Newman, the co-edited Early Modern Cultures of Translation, both out in 2015. Other recent publications include the complete translation of the poetry of Gaspara Stampa, co-edited with Troy Tower (2011); The Poetics of Masculinity in Early Modern Italy and Spain, co-edited with Gerry Mulligan (2011); and Reclaiming Catherine of Siena: Literacy, Literature, and The Signs of Others in 2010, which won the MLA’s 2011 Howard Marraro Prize for Outstanding work in Italian Studies.  Her current projects are a monograph, Saying Good-bye in the Renaissance, a co-authored book with Susanne Wofford on “Peasants and Pastoral”, and the English translation of Dacia Maraini’s latest novel, Chiara di Assisi: Elogio della disobbedienza (Clare of Assisi: In Praise of Disobedience).

Tylus was visiting professor at Harvard’s Villa I Tatti in Florence in spring 2015, and she is general editor of I Tatti Studies in the Italian Renaissance. She is the founding director of NYU’s Center for the Humanities and served as vice provost for academic affairs from 2005-2012.