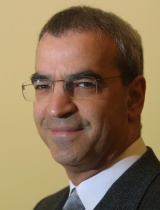 Mark Bassin is Professor at the School of Historical and Contemporary Studies and the Center for Baltic and East European Studies at Södertörns University, Stockholm.

Prof. Bassin’s research focuses on intellectual history in East and Central Europe, primarily Russia and Germany. He is interested in issues of identity, politics and ideologies in the 19th and 20th centuries. With a strong academic background in the field of human geography, he looks particularly at the spatial dimension of identity formation and negotiation. He has done considerable work on the problem of Russia’s position between Europe and Asia in Russian cultural history, and also on the vision of Mittellage in German debates about their national destiny in the 20th century. More recently, he has also investigated the question of nature and identity in Russia, looking at how landscapes were represented in the Socialist-Realist art of the Stalin period. He is particularly interested in how space has been theorized in political systems and ideologies, and has done considerable work on the history and concepts of Geopolitik or geopolitics, in Germany and across Europe. Currently, he is completing a monograph analyzing the ideas and reception of the Soviet historian and geographer Lev Nikolaevich Gumilev.