Joseph Heath | On the Scalability of Cooperative Structures 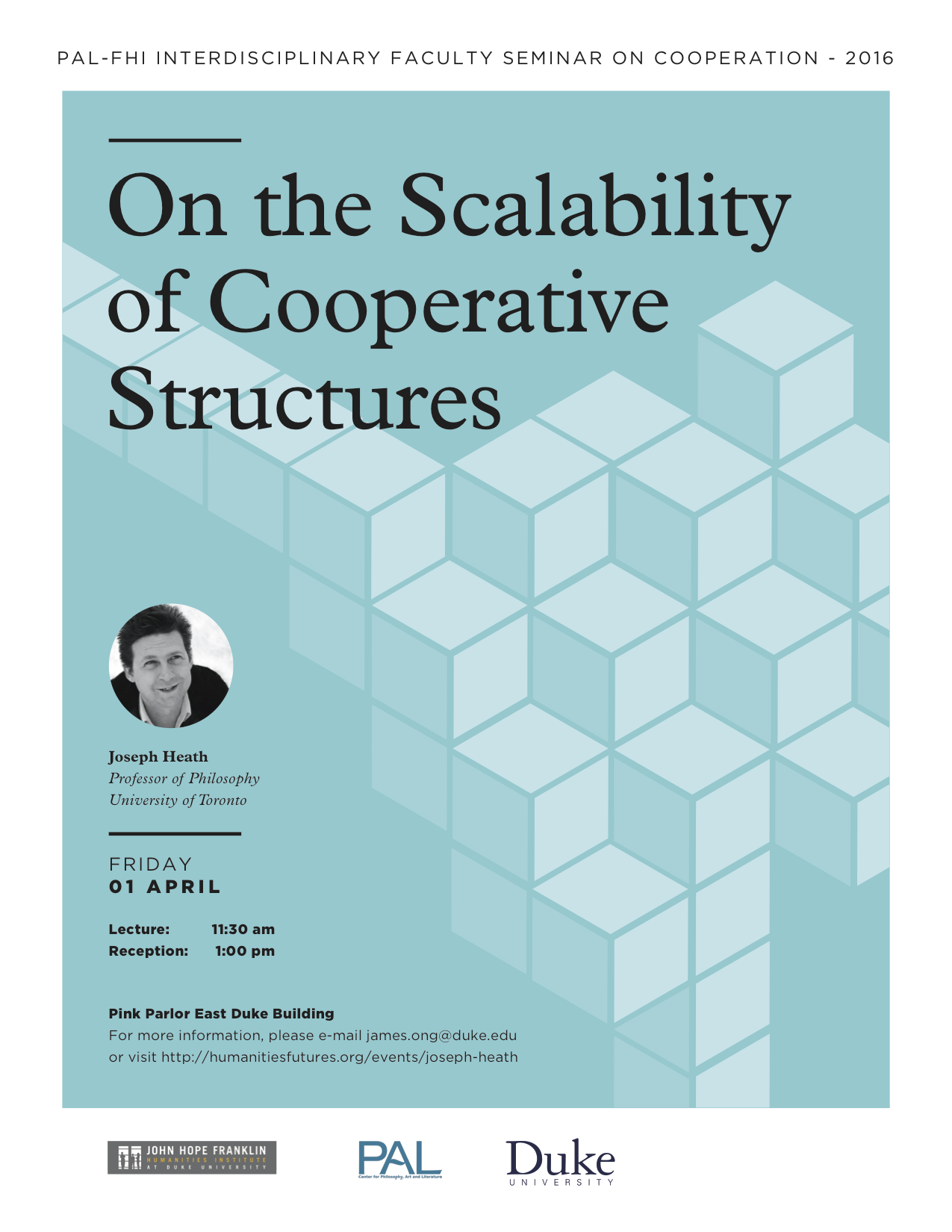 Please join the PAL-FHI Seminar in Cooperation for this public event.

Every system of cooperation is sustained by a particular "institutional toolkit" – devices used to promote cooperative behavior and to discourage defection. A particular toolkit is scalable to the extent that it can incorporate an increase in the number of individuals participating, while maintaining roughly constant levels of cooperative behavior. My central contention in this paper will be that our evolved psychology provides us with a set of pro-social psychological dispositions that can be used rather effortlessly to establish small-scale systems of cooperation, but that the fundamental architecture of these systems is such that they lack scalability. This is what accounts for many of the phenomena associated with our "unsocial sociability." Various behavioral dispositions we have, that are pro-social in small groups, start to become increasingly anti-social as the size of the group increases. This puts an upper bound on the level of social complexity that can be sustained using those resources. Thus it is only when cooperation is reorganized, and placed on a different footing, that it can be further expanded. In order to motivate the discussion, I start by showing how this issue of scalability matters to political philosophy, by discussing some recent work that neglects it. I then go on to show how it is important to recent discussions about the rise of the state. I argue that in complex societies we should regard major elements of social structure as essentially a set of kluges, designed to overcome the limitations of our natural sociability.

Joseph Heath is a professor in the Department of Philosophy and the School of Public Policy and Governance at the University of Toronto.  He began his teaching career at the University of Toronto in 1995 before spending two years as the Canada Research Chair in Ethics and Political Economy at the Department of Philosophy at the Université de Montréal, where he was a founding member of the Centre de recherche en éthique de l’Université de Montréal (CREUM).  Heath is the author of several books, both popular and academic.  Filthy Lucre (HarperCollins, 2009) is an analysis of economic fallacies and the role that they play in popular political discourse.  Morality, Competition and the Firm (Oxford University Press, 2014) is a collection of papers on business ethics and contractualism.  Following the Rules (Oxford University Press, 2008) reflects on the phenomenon of rule-following and its significance for rationality and social interaction.  Communicative Action and Rational Choice (MIT Press, 2001) studies the work of the philosopher Jürgen Habermas.  Finally, The Efficient Society (Penguin, 2001) is an articulation and defense of the logic of the Canadian welfare state.  Heath is also the co-author, with Andrew Potter, of the international bestseller The Rebel Sell (HarperCollins, 2004), a critical analysis of the political ideas inspired by the 1960s model of "countercultural" rebellion.